World at a Glance

Medical aid group, Medecins Sans Frontieres (MSF) has implored donors to take urgent action to reduce the
alarming mortality rates in Central African Republic (CAR).
In a report, MSF said that the government and international donors have been cutting back on investments in health.
The country with a population of 4.4 million is one of the world's poorest, and has a life expectancy of just 48 - the second lowest in the world.
MSF has attributed the high mortality rate to high prevalence of treatable diseases such as malaria, sleeping sickness, HIV and Aids.

Israeli medical researchers say they have developed a new technique for blasting cancer tumours from the inside out which reduces the risk of the disease returning after treatment.
Researchers at Tel Aviv University are about to start clinical trials of a pin-sized radioactive implant that beams short-range alpha radiation from within the tumour.
Unlike conventional radiation therapy, which bombards the body with gamma rays from outside, the alpha particles diffuse inside the tumour.
The researchers have had excellent results with many types of cancer models, including lung, pancreatic, colon, breast, and brain tumours.

Prosecutors in Brazil are demanding $10.6bn (£6.8bn) from US oil company Chevron for environmental damage caused when one of its oil wells leaked off the coast of Rio de Janeiro.
The prosecutors also asked the court to immediately suspend the operations of Chevron and its drilling contractor, Transocean, in Brazil.
Brazil has already fined Chevron $28m for the spill on 8 November.
A Chevron official said the company had not yet been notified of the suit.

In Malaysia, custom officials have seized elephant tusks and ivory handicrafts worth an estimated $1.3 million en route from Kenya to Cambodia.
The haul is the latest to indicate Malaysia has become an Asian transit hub in the illicit ivory trade, and follows the seizure of hundreds of African elephants' tusks in several busts by Malaysian authorities in recent months. The container's final destination was said to be the port of Sihanoukville in Cambodia.

The authorities in Chile are encouraging men to leave their ties at home during the coming summer months to save energy.
The country's energy minister Rodrigo Alvarez said the measure would help reduce the use of air conditioning and lead to overall energy savings.
Weather forecasters expect temperatures of over 30C (86F) this summer.

The Energy Ministry said letting the temperature of a room rise by 1-3C would reduce energy costs by around 3%. It could save about $10m.
Indonesian police raid punk concert 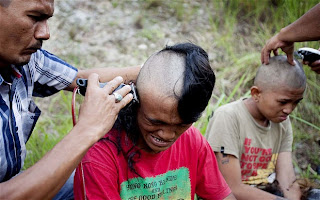 Police in the Indonesian province of Aceh  raided a punk-rock concert and detained 65 fans, shaving off their spiky mohawks and stripping away body piercings.

The crackdown marked the latest effort by authorities to promote strict moral values in Aceh, the only province to have imposed Islamic laws. Police chief Iskandar Hasan said,  "We're not violating human rights. We're just trying to put them back on the right moral path."
Officials say the punks will spend 10 days at a remedial school where they will undergo a re-education.
Posted by Oluchi at 06:14