Libyan democracy: can it deliver?

For a few moments I was paralysed. The text flashing across the TV screen felt surreal ‘Gaddafi captured.’ For six months NATO had been bombing Gaddafi in a bid to take him out. But Gaddafi remained defiant calling opposition fighters ‘rats’ and vowing to fight till the end. After a while news of Libya had all but slipped out of the headlines. 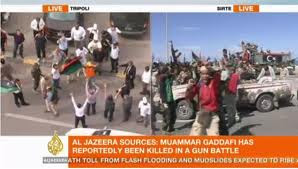 Quite frankly I had begun to believe Gaddafi was invincible. So it came as a rude shock when the headline ‘Gaddafi captured’ hit my TV screen. I stared at the young men spraying bullets in the air amid shouts of jubilation, and didn’t know what to make of it.

I flipped between CNN, Euronews and Aljazeera. On each channel reporters cautiously pointed out that the National Transitional Council had overblown issues in the past so we shouldn’t take the news of his capture as the final word.

Nothing prepared me for the video footage that flooded media outlets later on in the day -an injured and bloodied Gaddafi looking petrified and disorientated as he was jostled towards a car by a group of gun-wielding men. Then he was lying on the floor of an ambulance, dead. 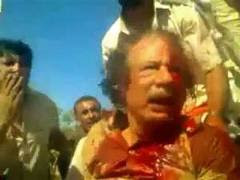 Events reminded me of a particular date: 8th of June 1998. It was the day Nigeria’s military dictator, General Sani Abacha, died. His death was sudden and mysterious. Like Gaddafi, he was ruthless. During his 1993 to 1998 tenure, he defiantly sent nine men to the hangman’s noose. He shut down uncompromising newspapers. Jailed critics. Like Gaddafi he also attracted international condemnation: Nigeria was suspended from the commonwealth; the EU imposed sanctions. Had death not cut him down, there were rumours that he was planning to make himself president for life.
A common trait found among dictators is an illusive belief in their own omnipotence and invincibility. When Gaddafi threatened to wipe out opponents in Benghazi he could never have imagined the resulting reaction.

Protests were sparked off after the discovery of a mass grave said to contain the remains of 1,270 inmates killed by government security forces at Tripoli’s Abu Salim prison.

Gaddafi responded to the people’s protests with military might. Unfortunately the violence meted out to him at the end must have defied all his imaginations - being dragged through the streets, shot in the head then flung onto a meat floor as an object of spectacle for his former subjects to watch.

On 28th April, 1945, Italian dictator Benito Mussolini met a similar fate. He along with his mistress and government officials were caught by Italian partisans as the allies closed in on him. They were shot, kicked and spat upon. Then their bodies were hung upside down on meat hooks from the roof of a filling station; people below hurled stones at them.

﻿﻿﻿﻿﻿
﻿﻿﻿﻿﻿
When dictators lose their footing the consequence can be damning. According to a BBC interview with one of Gaddafi’s former henchmen Mansour Dhao Ibrahim, he believed Gaddafi died an angry and disappointed man. According to Ibrahim, Gaddafi felt he had done so many good things for Libyans and his people should love him until the end.

Indeed when Gaddafi seized power in 1969, Libya was a barren land with little infrastructure. The roads, airports, hospitals, power plants and other infrastructure existing today were built during his leadership. Under his rule, citizens enjoyed free public education and medical care. Per capita income in the country rose to more than US $11,000, the fifth highest in Africa.

That wasn’t enough to save him. There is something about the human spirit that detests suppression of civil liberties; infringements on personal freedom; unjustified violence and an atmosphere of fear.

The Oxford Advanced Learner’s dictionary defines dictator as a ruler who has COMPLETE power over a country…OR a person who behaves as if he/she has power over other people.

I believe it is this unfettered exercise of power that gets under people’s skin. They want a leader who brings economy prosperity and progress to the table; but they also want a leader who gives them room to voice their opinions and participate in the matters that affect them.

That is why democracy holds so much sway worldwide. Abraham Lincoln famously described it as the government of the people, by the people, for the people.

Democracy among other things:

• Checks and balances the exercise of power, and

Established democracies like the United States, United Kingdom, and the Netherlands are a demonstration of the merits of democracy. Hence it becomes a one-way route for countries emerging from other forms of leadership like Libya, who are charting their way to a democratic system of government.

The late Nigerian Afrobeat singer, Fela, famously described democracy in pidgin English ‘as dem (them) all crazy’. And it does seem crazy. After General Abacha died Nigeria returned to civilian rule. Officially Nigeria is a democratic country. And yes, a lot has changed, both for the better and for the worse.


It is somewhat confusing. Dictatorship has not delivered the goods; neither has democracy. For many African countries democracy remains nothing but a myth. So what leadership is best suited to countries like Libya and a lot of African countries with their complex cultural, tribal and geographical make up?


Stepping back in time, many African countries did have successful systems of government that would probably not fall under the tag democracy. In Chinua Achebe’s novel ‘Things Fall Apart’, he depicts an African society where individual villages are governed by a council of elders. They deliberate on matters that concern the village; lay down the rules and settle disputes. The villages had their unique traditions, customs, and religion. There was relative peace, order and harmony.

Things began to fall apart when the European missionaries arrived with a new religion and order of governance. Slowly their influence began to erode the structures that had held the societies together for so long. To their credit, the missionaries abolished the killing of twins; promoted the equality of all people/discouraged the caste system. They also brought western education.

However they did not understand the ways of the people; the laws of their lands and their cultural practices so there were conflicts between both systems. One had to give way.

Personally I do not support the mindset that blames it all on colonialism. Countries are responsible for their own success or failure.

For the time being, all eyes will be on Libya. Will the new system of government deliver the goods? Or is it about time developing countries began to explore new systems of government?