Democracy is more than a label

It has been weeks since the death of Gaddafi and events in Libya have moved on.  However the macabre manner of his death will be remembered possibly for years to come. The image of the once invincible dictator being dragged through the streets, killed and then flung onto the floor of a meat room as a spectacle for Libyans was indeed pathetic. 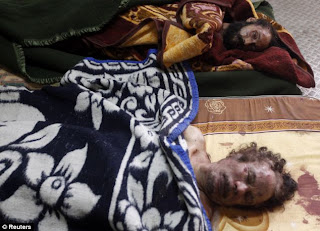 Given the improvements Gaddafi brought to his citizens’ lives – free education, medical care, water and electricity amongst other things – one might have expected a more pensive mood. But anyone who has lived under the oppressive yoke of a dictatorial, military regime will understand the outburst of celebration that took place on the streets of Libya.
Nigeria faced a similar situation between 1993 and 1998. Its military dictator, General Sani Abacha, like Gaddafi, was ruthless. During his tenure, he defiantly sent nine men to the hangman’s noose. He shut down uncompromising newspapers; jailed critics. Like Gaddafi he also attracted international condemnation: Nigeria was suspended from the commonwealth; the EU imposed sanctions. Had death not cut him down, there were rumours that he was planning to make himself president for life.
When he died mysteriously on the 8th of June, 1998, celebration erupted all over the country.  His death was followed by a period of transition, just as it is in Libya at the moment, in which the modalities for a return to civilian rule were worked out.
Nigeria officially returned to civilian rule on the 29th of May 1999, and ever since has worn the democratic label very proudly. The problem is, in many ways it is nothing more than a label. Things have changed since the return to civilian rule – both for better and for worse.
There is greater freedom of speech but no corresponding action to show for it. There is greater press freedom but journalists continue to lose their lives violently. There is greater personal freedom but the number of kidnappings by militants and criminals plus terrorist bombings has exploded; it was unheard of in Abacha’s time.

Last Saturday terrorist group Boko Haram killed more than sixty people in a bombing in Damaturu, capital of Northeastern Yobe state. President Goodluck Jonathan said he was ‘greatly disturbed’ by the attack and was working hard to hunt down the perpetrators. The U.S has since warned of further attacks but the government is striving to downplay the scale of the problem. The government’s placid response shows the sheer level of negligence and indifference it has towards its citizens.
When dictators are brought to book by the international community it is often due to their disregard for the sanctity of human life; stifling of personal liberties, press freedom and brutal suppression of the opposition. A civilian government may not be noted for unbridled brutality towards its citizens but is it any different if it is noted for colossal negligence to protect its citizens?
Are countries like Zimbabwe and Uganda better off simply because they bear the democratic label?
Libya’s National Transitional Council (NTC)  on its website set out its outline for a ‘modern, free and united state’. It includes:

·         Upholding the values of international justice, citizenship, the respect of international humanitarian law and human rights declarations, as well as condemning authoritarian and despotic regimes
·         Guaranteeing and respecting the freedom of expression through media, peaceful protests, demonstrations…in accordance with the constitution
The NTC’s outline for a democratic government should be the standard for every government. Democracy is more than label that governments can adopt, and hide behind to disguise lousy governance. It is a system of government that should improve the lives of citizens by guaranteeing basic human rights, promoting equality and good governance. After all what counts is not the label a country adopts but its adherence to the rule of law and ability to give citizens a better life. As political philosopher Alexander Hamilton put it, “Real liberty is neither found in despotism, nor in the extremes of democracy, but in moderate governments.”


*In case you're wondering why the same topic was treated twice, this is a freelance article I sent to news sites. Just thought I'd also put it up on the blog.
Posted by Oluchi at 09:02