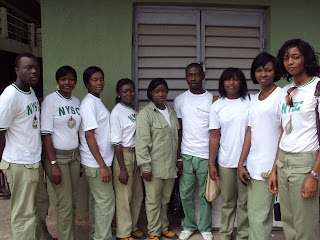 Eighteen months ago, having completed my studies in the United Kingdom, I was contemplating returning to Nigeria to participate in the National Youth Service Corps (NYSC) scheme. The scheme was born in the 1970s when Nigeria was just emerging from a bloody civil war which lasted for 30 months. The government saw it as a way of enhancing national unity by gathering thousands of young graduates from all over the country for a three-week orientation course in camps around the country every year. This was followed by a year-long service in which graduates were posted to various establishments to work.

Some of the NYSC’s objectives

As part of its objectives, the NYSC scheme aims to:
Inculcate discipline in Nigerian youths by instilling in them a tradition of industry and of patriotic and service to Nigeria in any situation they find themselves.
To enable Nigerian youths to acquire spirit of self-reliance by encouraging them to develop skills for self-employment
To develop common ties among Nigerian youths and promote national unity and integration
To contribute to the accelerated growth of the national economy
When I told my friends in the UK I was thinking of returning to Nigeria for my NYSC, they thought it was one of those flash-in-the-pan ideas that would sooner or later evaporate. I parried many ‘but why?’ questions from them. ‘Nigeria is in a mess’, my friends tried to dissuade me, ‘power supply is erratic, security poor, law and order lacking, infrastructure poor, and career prospects dim'. Why was I leaving a well-structured, developed society, albeit exclusive, for greyer grass? ‘Because it is my home; I cannot abandon it. Tomorrow the NYSC certificate maybe useful; who knows? I could be a future minister for the federation', I retorted convincingly. At least a few were bought over, and gave me the thumbs, saying go ahead. And go ahead, I did.

I’m now five months into the youth service scheme and I find myself, many times, teetering on the brink of regret. From the look of things, no one gives a hoot about corp members: not the government, or the establishments they are posted to. Sadly, many corp members waste their time teaching in secondary schools, where the skills they gained in higher institution are barely utilised...I could go on and on about the service year, but instead I’ll start where it all began – orientation camp.

The sun was in a bitter mood as I arrived at the orientation camp in Iyana-Ipaja, Lagos. It was so hot I feared I and other corp member hopefuls would melt into gummy masses of candy. At the gate of what later turned out to be a quasi-prison yard, security men checked my suitcase and made sure I had my student ID plus call-up letter from the NYSC secretariat, allowing me to participate in the programme.
After security checks, I hobbled downhill with my suitcase in one hand while taking in my new environment. The towering hostels were coated in fresh creamy yellow, the parade ground neatly tarred and a market comfortably juxtaposed across the road. It was comforting to see camp did not consist of dilapidated classrooms stuck on an arid piece of land (a handy description given by my friends serving in other states)

Before long I was assigned a bed which could barely contain my six foot frame. It was one of 14 bunk beds crammed into a rectangular room – I must admit I nearly moon-walked out of the room when I first saw it. Not that I was expecting a five-star hotel, but neither was I expecting a cramped room with time-worn mattresses resembling powerhouses for head lice and an assortment of skin diseases.

Registration procedures created a better impression. Kudos to the organisers, on reaching the registration hall, things were fairly straightforward. Women first of all went for pregnancy tests (a very humbling experience indeed), and then foreign-trained graduates had their own rally point, while home-trained graduates were grouped according to their geopolitical zone: north, south-west, south-south and so on.
The long afternoon slipped into evening and we were rallied to the parade ground for an address by the head of camp. She laid down the rules as well as sketched a portrait of what we were to expect during our three weeks: rising by 4.30am every morning for physical training, drills, lectures etc; wearing white always with the exception of special occasions, when we would wear our uniform: khaki, T-shirt and boots.
As promised, the next morning the bugle jolted us out of bed with its piercing noise. But way before the clarion call people were up as early as 3am to get a space in the bathroom before a queue built up. It continued to be the case for the remainder of the week. For the first few days I woke up with an eerie zombie-like feeling. However the routine soon grew on me: before 3.30am I would be up to get a space in the shower, and by 4.30am I was good to go. I also grew to love the parade ground. The spirit of camaraderie was never lacking: whether we were singing tacky songs during exercise like if corper marry corper dem go born mumu, or we were tutting and rolling our eyes at a sales pitch dressed up as a lecture on self-employment, or moaning about fire-wood scented red-rice meant to pass for jellof rice or defying the soldiers who were hovering around us to instil discipline; we were all in the same boat facing roughly equal measures of woes and wonder.

Camp life was a mixture of lectures, entertainment, exercise drills. The over-arching reaction to seminars and lectures by various NGOs, individuals and government officials was teacher no teach me nonsense. By way of entertainment there were sports and games, and opportunities for corp members to socialise such as a welcome night; the DJ turned out to be an otondo and was booed by the crowd. There was variety night hosted by comedian AY, with appearances by M.I. The Miss NYSC/Mister Macho competition was another great event.
Exercise drills were done half-heartedly. Probably because everything was confined to the parade ground and we never got an opportunity to jog or go outside camp except during our eight-hour endurance trek.

Part of the objectives of the NYSC is to develop in youths the attitudes of mind to help them act in the national interest as well as a patriotic and loyal service to Nigeria in any situation they find themselves. However one thing that niggled me sometimes was overwhelming lack of patriotism among corp members. My observation was that there was a lack of individual responsibility plus a passion for the country. Very few people talked about the problems of Nigeria or how to solve them or make a difference in their generation. Ambitions were mostly mediocre, getting a comfortable job and pursuing personal interests. Like someone murmured during the national anthem on the parade ground ‘na by force to serve Nigeria?’ One of my friends was so cynical about the whole scheme. I tried to make him see reason but he shrugged and said something like ‘Let’s face it, we are not doing the service because we really want to but because we have to'. That may sum up the attitude of many people in camp.

Disregard for rules was at times appalling. One incident has stuck with me. I was going to brush my teeth early in the morning when I met a room mate in the corridor splashing water all over the floor, washing her undies. I politely suggested she used the bathroom so the floor doesn’t get messy. ‘I’ve heard you’, she spat at me uninterestedly and continued her washing in the same manner. And, as if to tell me my words were water on a ducks back, she threw the full bucket of water on to the bathroom floor. I decided to ignore her even though I was burning with indignation inside. Neither could I understand why people chose to throw their litter on the floor despite the many dustbins sited around the camp. The things that irked me most were the disregard for cleanliness: people relieving themselves on the bathroom floor; disgusting WCs, the raw smell of sewage.

Three weeks trickled by. Finally it was time to say adieu. There were smiles, tantrums, tears. Those posted to work places relevant to their field had reason to celebrate. Those with inappropriate postings swore with abandon…like yours truly (a journalist) posted to a secondary school.
Once again my faithful suitcase tagged behind me as I joined the stampede towards the gate. At the gate I took one last look at the stretch of tarred road behind me and the creamy buildings that had been home for three weeks. I paused to gauge my feelings, and then suddenly it struck me that I was once again part of the wider world. My struggles had just commenced.
Posted by Oluchi at 12:24 5 comments: