Get it off your chest!

I was listening to BBC radio four this morning – one of my favourite stations – and up until I left the house there was nothing captivating on their news programme. That’s highly unusual. Shows that even the most creative media outlets can struggle to keep things lively and exciting in the midst of a news drought.


So you’ll have to bear with me if I sound like scratched CD, revisiting the same issues over and over again.

This week yet another video popped up on the web. It was another train journey kerfuffle. This time in Scotland. It showed a lad arguing with a ticket collector for not having a valid ticket. He swears at the collector who repeatedly tells him to get off the train. The melee drags on a little until a bulky passenger now dubbed ‘big man’ butts in and asks the collector, “Do you want me to get him off for you?” 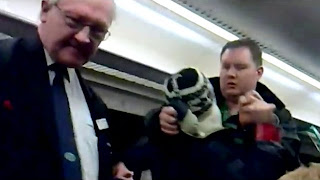 He then proceeds to shove him off the train. The lad attempts to get back on but he pushes him back onto the platform. Apparently he received a round of applause from fellow passengers.

I laughed at first when I watched it but my sister pointed out that the big man had no legal right to touch the boy. Oops, I thought. I’d never dream of laying a finger on anyone in such a circumstance but I thought how ignorant many of us are of the law. The next day I read that the boy’s father wants the big man to be charged for assault.

Presently the big man has garnered more support judging from the comments on news sites and forums.

Firstly, I strongly condemn the big man’s tactics. I know what it is like to endure the antics of a passenger who turns out to be a nuisance on public transport BUT big man should have saved his display of strength for the boxing ring. If he’s really that strong, he should sign up with WWF go enter a wrestling ring and take on Hulk Hogan and the likes. Yes, the guy was getting on his last nerve but it is inexcusable for him to toss him about like a raggedy doll.

Besides there are two sides to every story so next time before assigning yourself the position of an arbiter, think twice.

The lad’s family argued that he was sold the wrong ticket at the station. That is possible. But that does not excuse his use of language. Okay, I risk sounding like a grumpy old woman here even though I’m far from one, but if I could pass one law it would be that the use of the F-word should be banned in public. If your mouth is so itchy that you’re dying to swear, wait until you’re behind closed doors, in your house!

Why must young people especially litter every sentence with F this and F that? Gosh, it’s as if having a sense of decorum is becoming an exception!

It’s a shame some newspapers are even permitting its use on their pages.

Another story that cracked me up came out of Nigeria. A man is away from home but on his return what does he see? A young man having his way with his 20-year-old daughter! The man doesn’t wait for the judge to decide whether or not it is rape. He administers justice there and then by slicing off the assailant’s manhood. Dear me. The young man alleged that the daughter was actually his girlfriend. But he was charged for unlawful break in and rape.

As for the father, a judge has ordered his arrest for taking the law into his hands.

This might sound controversial but the father went too far. If it were a six-year-old girl, he would have my sympathy. But his daughter is 20. How could an unarmed man possibly break into the house and rape her? Rape in my opinion, would be more possible if he was armed .Perhaps she was his girlfriend and she only put up a show of resistance upon sensing her father’s return and not knowing how to back out. Okay, I’ll stop here.

The young man on the other hand is nothing short of a fool, I don’t need to mince words. Nigeria is a very conservative society with strong moral traditions. Even if the girl was his girlfriend, common sense would tell him it is forbidden in Nigerian culture to have a girl under her father’s roof!

I’ll take a deep breath here because my catholic friends are not going to like what I’m about to say. If the oath of celibacy is causing so much controversy and leading to the abuse of children – which is very destructive – then it should be scrapped or made optional.

Obviously the priests involved in the abuse of children cannot receive it. The fact they signed up for celibacy does not mean they have the gift of celibacy. And there is no magic machine that can detect that even if they are subjected to years of training.

My two cents: if a tradition is causing more harm than good, it’s time to have a rethink.
Posted by Oluchi at 07:02