(This is the concluding part to 'We "don't do God" in politics. Enjoy it).

Before Queen Elizabeth I ascended the throne of England, the country had had its fair share of religious strife and bloodshed. Her predecessor, Queen Mary I, notoriously burned protestants in a bid to return England to Catholicism.
It was under the prevailing circumstances that Elizabeth I declared:

“I never had any intent that (my) subjects should be troubled or molested by examination or inquisition in any matter either of their faith or for that matters of ceremonies, as long as they shall in their outward conversation show themselves quiet and not manifestly repugnant to the laws of the realm.”

She laid the foundation for religious freedom and tolerance.

That was back in the 16th century. Things have moved on since then. As I mentioned in the previous post, secular neutrality is now touted as the best stance governments should take towards religion.

Under a secular government:

• The legal system is free from religious control

• Public funds are not used for religious purposes

In essence, the machinery of state is neutral, leaving individuals free to hold their own beliefs.

One of my readers summed it up eloquently in a comment he posted. He wrote:

“ I think it is better for governments to steer well clear of religion, because,as history has shown the tendency to inflict harm on society increases exponentially when religion is cited as the driving force for a particular course of action.”

On paper, neutral secularism looks good. In arguments, it sounds cogently reasonable. However, it is impossible to separate politics and religion.

Why? Well, first of all, we need to go back to the basics. What is religion?

• The belief and worship of a superhuman controlling power, especially a personal God or gods: ideas about the relationship between science and religion

• A particular system of faith and worship

• A pursuit or interest followed with great devotion

It would be absurd to presume that any single human being is devoid of these two qualities.

Atheism is premised on the belief that there is no God.

Secularism is premised on the belief that keeping religion separate from the state is essential to promote equality.

Even if a person claims not to be religious, an atheist or agnostic, s/he must be devoted to something. It could be the pursuit of fame, money, fitness, health or knowledge. We are wired to want, and our wants drive us to pursue. Therefore by nature we are religious. How then can we separate religion from politics?

In theory it looks so simple - take a big knife and lop them asunder. In reality, it’s like going down to the seashore and trying to separate the water from the sand. An impossible task!

The very idea that a state can be neutral is a myth. Who determines what is neutral? The atheist? The agnostic? Why should their beliefs, which boils down to religion, be favoured over others?

Many times neutrality is a rejection of religion, which in itself is a bias against religion and removes the claim of neutrality.

Interestingly many states categorised as ‘secular’ maintain a lot of religious practices and symbols.

In France for example, many Christian holy days are official holidays for the public administration, and teachers in Catholic schools are paid by the state.

In April this year France banned women from wearing face veils in public. Anyone seen wearing niqabs and burqas could be fined up to €150, or attend lessons in French citizenship. 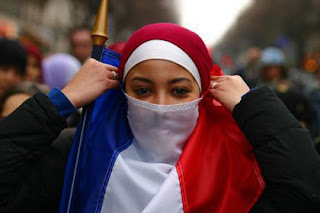 As stated earlier a neutral country allows individuals the right to hold their own beliefs. Question: does France’s actions display neutrality?

The United States is another example of a secular government. How is it that since 1937, the United States presidential inauguration has included one or more prayers given by members of the clergy? It doesn’t add up.

As mentioned in the earlier post, in the UK critics were kicking up dust because the Prime Minister, David Cameron, said that Britain is a Christian country. Many found it insulting that the PM should make such a suggestion in a multicultural society that is home to various religions. It is a secular country, they argued. Illusions of grandeur. In Britain’s upper house – the house of Lords - Twenty-six bishops (including the two Archbishops) are members and are known as the Lords Spiritual. They are thought to bring a religious ethos to the secular process of law.

The simple advice Cameron proffered was: traditional Christian values should be revived in order to counter the “moral collapse” in Britain. He said "live and let live" had too often become "do what you please".

And that’s the problem with neutrality, it also implies anything goes, so there’s no moral compass that people can collectively follow.

Conversely religion offers a clear roadmap about acceptable and unacceptable moral behaviour. Now this does not translate to theocracy or the chopping off of heads and hands in the name of religion. No. It means each country has its religious base which sets the norm for its citizens. As Queen Elizabeth I said, people are entitled to individual faiths as long as they fall within the boundaries of the law.

One of my favourite Obama quotes is, what binds us together is greater than what drives us apart. I believe that.

We might practice different religions, but there are always meeting points. Most, if not all religions advocate love, fairness, honesty, tolerance and kindness amongst other virtues. The forces that bind us together are greater than the forces that drive us apart.

So if a leader says his/her country is a Christian or Islamic or humanist country, he could be saying in essence; this is our moral frame work. We will not persecute you for practicing a different religion, but we expect you to adhere to this way of life.

While neutrality might be upheld as the best policy, it opens the door to moral decline and a lack of direction. It is religion that molds a better tomorrow.