The Truth about Human Zoos (conclusion)

It is an extravagant misconception to think that human zoos equal rounding up natives in a confined space and subjecting them to the glare of curious audiences. It is much more than that.

Human zoos are the everyday photos we see in news reports capturing the pain and suffering of the ‘other’. The ‘other’, who may not necessarily be called primitive, native or be a protected tribe, is still exploited by charities, photographers, news agencies and individuals. 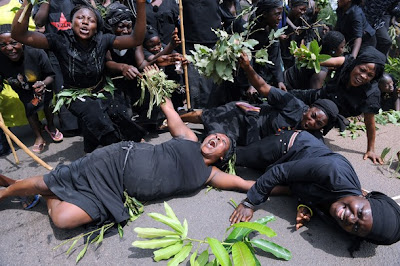 And, as a reader, you are not exempted. Your unmitigated appetite for unusual, salacious, shocking, out-of-the-ordinary stories is creating the vicious cycle. You want to be amused, titillated and thrown off your trajectory. You are just like the spectators hundreds of years ago gawking at the 'exotic-looking' natives confined to a zoo by their European masters.

Without your patronage, the flow of exploitative stories hiding under sanctimonious headlines such as 'outrage at human zoos' will cease to exist.

The most abysmal part of it is that we do not realise our capacity to be compassionate is slowly being eroded by the commercialisation of suffering. We have seen too many pictures of the suffering African/Asian child: a collection of skin and bones teteering on the cliff of eternity; too weak to fight off myriads of flies travelling up his/her nose. We have seen the bloodied bodies of war victims - young, promising soldiers as well as mutilated victims. The pictures have lost their ability to jolt us out of our comfort zone; we can take it in our stride.

Race still an issue
The concept of racial inferiority can no longer find its way into mainstream literature, but that does not erase its existence. We view our lives through juxtapositions. When we see photos of the 'other' suffering, we think of ourselves as privileged. When we see photos of the 'other' in perpetual conflict, crisis and a state of retrogression, we consider ourselves a glittering epitome of prosperity. We are the rainbow that lights up the world and blazes the trail for what should be. Inadvertently, racial superiority is reinforced in subtle but significant ways. One way or the other, the status quo is maintained. That is the way of the world.

The Truth About Human Zoos
Human zoos, even with the best intentions, cannot be abolished. Why? To repeat a highly-trumpeted point, because we are exploitative and selfish by nature. We see other people as a means to an end.
The photo below encapsulates human selfishness in all its 'magnificence'. It was captured by an award-winning South African photographer, Kevin Carter, in Sudan in March 1993. The starving girl pictured is trying to reach a feeding centre. In the background a vulture is waiting to see if she will become its next meal. 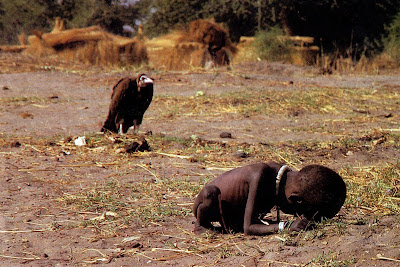 When the photo was first published in the New York Times, hundreds of readers contacted the paper to enquire about the fate of the girl. That was when it came to light that Carter had simply taken his 'perfect shot' then left the scene. The girl's fate remains unknown. Not surprisingly, Carter was subjected to a barrage of criticism.

One of such criticism by Saint Petersburg Times in Florida aptly described  not just Carter’s behaviour but the behaviour of media outlets:
"The man adjusting his lens to take just the right frame of her suffering, might just as well be a predator, another vulture on the scene.”

There is a lot of truth in the paper's criticism. However we must not underestimate man's capacity to do good. Regardless of how selfish people are by nature, deep down there is a nugget of empathy for the suffering of others. So next time you find yourself caught in a human zoo - viewing those shocking, titillating images - ask yourself: what can I do to change the situation in my own little way? We might all be inadvertent spectators of human zoos, but we have the capacity to change things for the better.
Posted by Oluchi at 23:55