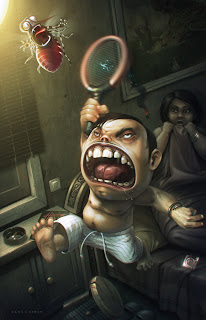 Ninety minutes later, I arrived at Royal Free Hampstead Hospital; dragging behind me a suitcase crammed with all the clothes and personal stuff I would need for a two-week stay…my two-week estimation later turned out to be a massive miscalculation.

I was led to the Garrett Anderson Ward for tropical diseases on the eleventh floor. A nurse showed me to my room – a self-contained chamber with a large bed dominating the space. Complicated monitoring equipment hung from the ceiling and from the walls, humming silently. In the corner was a small table with a large Manila envelope on top.

I dropped my bag and went to peer out of the window; the view from such a height was both dizzying and spectacular. Then Dr.Cropley stepped into the room and closed the door behind him. I turned to face him; there was something odd about him…he was wearing a surgical mask. When he spoke his voice sounded cartoonish and distant. He quickly told me that the results of the lab tests had come, and they were not positive! But he said I needed to read and then sign the document on the table. “If you need any help or if there is anything you don’t understand, let me know,” he said.
Before disappearing through the door, he added that I had to be alone when I read it. Things were getting stranger by the minute!

Once Dr Cropley had left the room, I went to sit at the table and withdraw the contents of the manila envelope. It was like nothing I had seen before. The title read “Declaration of next of kin” – hmm. But it was the small print at the bottom that drove me to the point of fear and despair. It read “This is a declaration of who to contact in case of death”! Death!!! Oh my God!! I did not just read that, I thought. My heart was pounding so loudly and it felt like it was about to explode out of my chest. So they expected me to die? I mean, sure I had been sick for the past three weeks with a permanent cough, sweaty fever and painful joints…but death? This was surreal. Was I dreaming?
Anyway I signed the document and pushed it away. Then I waited.

Dr.Cropley came back half an hour later, surgical mask still intact. He asked if I had signed the declaration. I said yes. He then asked if I understood it very well. I answered in the affirmative. “Good”, he said and picked up the envelope. My eyes fastened on him, burning holes through his head: I needed answers.

“Your results show a serious pulmonary infection to about 90 per cent of your lungs", he began. "Which is why we had to have you admitted immediately so we can begin treatment."
“We will do our best at offering you the best treatment but your chances do not look good…”
He went on to say that it was imperative that we expect the worst.
“You mean death don’t you”, I asked. He nodded slowly. My heart sank into utter despair and I was overcome by a depressing feeling of helplessness. How did it come to this? One little vacation in Southern Africa and everything ends up with me on the brink of death, thanks to some tropical disease. Why me, why me!

Cropley sat with me for the next half an hour mapping out my treatment regime for the next three months. Three whole months! Since this was the 1st of December it meant I would be spending Christmas and New Year fighting for my life on the eleventh floor of a hospital ten thousand kilometres away from my mom, brother and sister! 1st December 2004 had started with so much promise, and here it was ending with utter despair. The tears flowed fast and hard. I don’t recall whether they were tears of frustration, helplessness or fear, or all three.

Few hours later the sun sank and night fell; I crawled under the pristine white covers on the bed. And there began the first night of a three-month hospital stay, which consisted of drugs, intravenous-fed antibiotics, food tests and more of the same; followed by a further two years’ home treatment plan.

Although I have been to the brink of death and back, I still go to Africa.
Posted by Oluchi at 14:05

Email ThisBlogThis!Share to TwitterShare to FacebookShare to Pinterest
Labels: Fiction