At least 44 prisoners were killed in Mexico after a fight broke out between rival groups in a prison north of the city of Monterrey. The state security spokesman Jorge Domene said the fight was sparked by rivalry between drug gangs. An investigation is underway to establish if prison guards colluded in unlocking the doors separating two wings of the prison.
In a separate incident in Nigeria, at least 118 prisoners were set free by armed men in an attack on a jail. According to reports, as many as 200 prisoners escaped when 20 gunmen on motorbikes stormed the federal prison in Koton-Karifi, south of the capital Abuja. One guard was killed in the process. There is no known motive for the attack. The Nigerian government says it has launched an investigation.
Latvians reject Russian as second Language Latvians have overwhelmingly rejected the adoption of Russian as a second official language in a national referendum held on Saturday. Almost 75 per cent of voters were against giving Russian equal status with Latvian. Ethnic Russians make up one-third of the population, and have long complained of discrimination. However, many ethnic Latvians see the adoption of Russian  as a challenge to the country’s independence. Learning Latvian was a prerequisite for citizenship after the country split from the Soviet Union twenty years ago.  Many Russians resisted, and about 300,000 remain without citizenship.
Libya to pay each family $1,500 Libya’s government is to pay each family more than $1,500 in an attempt to deal with discontentment among its citizens. In a televised address a day after Libya marked the anniversary of the uprising; Prime Minister Abdurrahim El-Keib said each family will receive $1,540. Unemployed former rebels and families whose relatives were killed or missing will also receive an unspecified amount.
Meanwhile a report has revealed that more than 40 per cent of Libyans prefer strong leadership from one person or a group to democracy. Researchers from Benghazi and Oxford universities found that just 15 per cent want democracy to be installed next year.  Oxford University’s Dr Christophy Sahm said the survey suggested Libyans lacked the knowledge of how democracy works.
500m Children at risk of stunted growth

Half a billion children are at risk of stunted physical and mental growth over the next 15 years due to malnutrition, according to a report. The Save the Children charity found that many families do not have enough to eat and cannot afford meat, milk or vegetables.  A third of parents surveyed said that their children complained about not having enough to eat. One in six parents said their children abandoned school to work. The survey was carried out in India, Bangladesh, Peru, Pakistan and Nigeria.
Save The Children said record food prices had worsened malnutrition, which contributes to the deaths of 2.6 million children every year.
Four Chinese face deportation over tortoise meat Four Chinese nationals are facing deportation from Zimbabwe after they were arrested for killing more than 40 rare tortoises for meat, officials say. Animal welfare officials said the men admitted charges of animal cruelties. Investigators found the remains of 40 endangered Bell’s Hinged tortoises in a raid on the men’s house. Tortoise meat and thirteen live tortoises were also recovered from the men’s house. The tortoise is listed as an endangered species under the Convention on International Trade in Endangered species.
World's tiniest lizard discovered 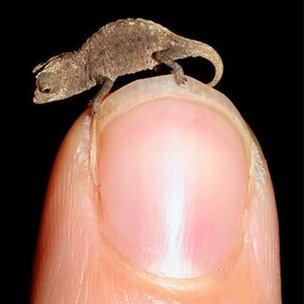 Researchers in Madagascar have discovered one of the world’s tiniest lizards. The miniature chameleon, Brookesia micra, has a maximum length of 29mm. According to scientists, this phenomenon occurs when a species becomes smaller over evolutionary time in order to adapt to a restricted habitat such as an island. Scientists believe the small ranges of the species make them especially sensitive to habitat disturbance.
Posted by Oluchi at 01:15