Read of the Week - The Forgotten Heroes of the Ebola Crisis

This week's read is a very touching story about former ebola workers in Liberia who are now outcasts in their communities, due to the nature of the job they performed in eradicating ebola. Won't give away too much. Hope you enjoy the read from the New York Times.

They Helped Erase Ebola in Liberia. Now Liberia Is Erasing Them. 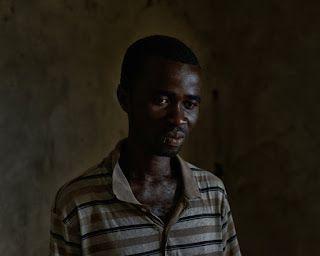 Sherdrick Koffa, estranged from his family because he helped burn bodies during the Ebola outbreak (NYT)
MARSHALL, Liberia — It was around 3 in the afternoon when Sherdrick Koffa spotted, in neatly written script, the name on the body bag that he was preparing to set ablaze.

It was the name of a classmate. The two grew up together, had played together as children. Now, only a few days into his job burning the Eboladead, work that had already estranged Mr. Koffa from his family, he was expected to burn the body of his friend.

He did it. First he sprayed the body with oil to help it catch fire. Then he carefully laid the body, along with several others, upon the kindling on the altar of the crematory. He stacked more kindling on top. Finally, as the kindling was lit with a torch, Mr. Koffa stripped off his protective gear and stalked off the field, away from the acrid smell of burning flesh.

He did not stop walking until he got home, and once there, he opened first one bottle, then two, of cane juice, the highly potent Liberian equivalent of moonshine. He drank all night, until he passed out.

It has been more than a year since this deeply religious country embraced one of its biggest taboos — cremating bodies — to rein in a rampaging Ebola pandemic. In that time, the majority of Liberians have started to move on.

But such is not the case for some 30 young men who were called upon during the height of the crisis last year.

As bodies were piling up in the streets and global health officials were warning that the country’s ages-old traditions for funerals and burials were spreading the disease, these men did what few Liberians had done before: set fire to the dead. And for four months they did so repeatedly, burning close to 2,000 bodies.

Villagers protested near the site, hurling abuse and epithets at the men they called “those Ebola burners them.” The government deployed police officers and soldiers along the dirt road to the crematory site in a field to keep angry locals from the men.

Their families shunned them as they pursued their grim work. One young man — Matthew Harmon — who lived not far from the crematory site here, said his mother refused to see him, telling him never to call again.

“My ma said, ‘You burning body?’ Then I’nt want see you no more around me,” Mr. Harmon said.

The ostracism darkened what was already an abysmal time for the men, so much so that now, a full year after the country has ceased the cremations, their lives remain virtually destroyed.

Their nights are spent with alcohol or drugs — habits they said they acquired to get through the mass burnings. One burner, William Togbah, says no night goes by when he does not dream of seared flesh. Several of the men, shunted aside by friends and family, now live together, sharing the same room in a house not far from the crematory site.

For the most part, Liberia has come out of its long national nightmare. Ebola cases flare up sporadically, with three new infections reported just last month, and experts warn that the disease may continue to pop up for years to come.

But children are back in school, crowding sidewalks in their uniforms as they head home in the afternoon. Soccer games have resumed, with a packed Antoinette Tubman Stadium recently hosting 10,000 people to watch their beloved Lone Star national team take on, and lose to, the African giants from Ivory Coast. Church pews have filled again, with people grasping one another’s hands and trading hugs during the “peace be with you” part of services, a stark change from the no-touching rule many adopted here as the epidemic raged. 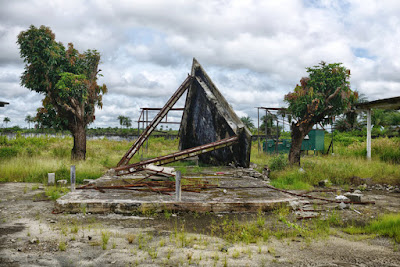 The now-abandoned crematory in Marshall, Liberia, last month. Some of the 30 young men who worked there are still haunted by the work they did, and are being ostracized for it. (NYT)

Yet the men continue to be tormented by what they saw and did. Initially, they used an incinerator to burn the bodies, usually during the night. But that method left human bones to greet them when they returned in the morning, grisly remnants of the vibrant people who had lived their lives in this West African country.

Mr. Togbah and several others kept using the word “erase,” as in, they erased the traces of the Ebola dead for their country. In turn, their country has now erased these young men.

Many Liberians still blame them for burning the dead. While they received certificates of appreciation from the Health Ministry, they were not part of the recognition ceremony held by the president to thank health care workers for their efforts during the outbreak, an omission the young men took to heart.

“We missed some people,” President Ellen Johnson Sirleaf said in an interview, adding that there were too many people to thank, and that she hoped to hold another event recognizing these men.

Still, they are largely shunned by Liberian society.

To understand how cremation is viewed by Liberians, one must first consider that this is a country with a national holiday — Decoration Day — meant solely for people to go and clean the graves of their loved ones. Every year on Decoration Day, Liberians troop to cemeteries and burial plots across the country with brooms, bleach, soap and water.

Wakes can go on for days. People with little or no money to spare will beg and borrow to lay their dead in coffins made of black mahogany wood. They will build marble tombstones, and buy entire plots of land just to bury those they love. Many Liberians believe that if the dead are not properly buried, they will come back to haunt the living.

People here wash bodies and dress them to make sure they are ushered into the afterlife in style. A dead body for many Liberians is, in a sense, still a living thing, to be nurtured, looked after and lovingly sent onward.

“It is just not in our culture to burn people,” said Sampson Sayway, who helped organize the group of men to burn the bodies.

So when a line of government cars showed up in Marshall last year at the Indian-run field that is the country’s sole crematory — previously used only for burning dead Indian nationals — Mr. Sayway, who lives a stone’s throw away, immediately went out to investigate. It was early August 2014, at the height of the epidemic, and Ms. Johnson Sirleaf’s besieged government had made a last-minute decision to take the advice of global health experts who said the bodies of the Ebola dead — the most infectious carriers of the disease — had to be burned.

Liberian officials knew the public would revolt. The government stationed police officers and soldiers along the route to keep villagers away. Government officials negotiated with Mr. Sayway over what the workers would be paid, around $250 a week. In a poor country like Liberia, that was enough money to get roughly 30 young men for the job.

But “it was no easy thing,” said Fredrick Roberts, one of the burners, recalling that first night when the trucks came with the first 12 bodies. Terrified of getting too close to the Ebola dead, everyone scattered into the bush at first, as someone in the truck yelled out via a megaphone to keep a distance.

“I had no clue what I was getting into,” said Ciata Bishop, who was tasked by the president with setting up the crematory operation.

That first night, the young men wore blue cloth jumpers and plastic gloves, but government officials later gave them protective clothing, gloves and boots. Day after day, night after night, the trucks came with the bodies. The burners unloaded them, sprayed them with oil and piled them on an altar.

“It smelled very bad,” Mr. Koffa said. “Like meat, except different.” His voice caught and he stopped talking, overcome. He and the other burners had gathered near the crematory field. They are never far away from it now. The place they hated so much has become a home, of sorts. Nowhere else will accept them.

Because the incinerator was unable to turn the bones to ash, the men switched to burning bodies on pyres set upon two altars in the field. It was more time-consuming, but at least at the end there were only ashes to deal with.

One day, the trucks delivered 137 bodies. “It took two days and a half,” said Burdgess Willie, another burner. “It smelled so bad, we kept having to go away and then come back.”

Sometimes there were explosions, from the combustion of the oil, body bags and wood. The noise terrified villagers, further adding to their anger at the burners and the process.

Mr. Roberts’s landlord put him out of his rented room, and he moved in with Mr. Harmon, the burner whose mother had shunned him. Soon other young men, turned out of their homes, were sharing the small room, too.

The men took to drinking and drugs to get through the nights. Government officials sent them extra bottles of cane juice, they said.

Then suddenly, just like that, it was over. In December, under intense public pressure and with the number of Ebola deaths declining, the government announced that it was ending cremations. A new 25-acre parcel had been secured, government officials said, to bury the Ebola dead.

For the 30 young men who carried out the task of burning more than 2,000 Ebola dead, the ordeal was over.

Mr. Roberts said that a few days ago, almost a year since the government ended the cremations, he tried to get into a taxi. One of the passengers spotted him and quickly turned to the driver. “He said, ‘This man worked in the fence, that Ebola burner, oh,’ ” Mr. Roberts recalled.

“Get down from the car,” the taxi driver insisted.