The Benefits of Being Fake

Except you’ve been hiding under a rock, or you mysteriously migrated to Mars, you must have caught the hullabaloo about the sartorial feats on the Golden Globes red carpet.


I’m not a big fan of celebrity award events or celebrity fashion trends, but I had to treat my eyes to the quirky blend of odd designs, clashes of bold colours and rolls of sweeping fabric floating across the red carpet because almost every site I visited was shoving the photos under my nose.

And no, I am not moaning about the coverage - it’s nice to have some fluffy news once in a while. Rather, I am scoffing at the contrived attempt at uniqueness and originality in the fashion designs. One newspaper commentator praised the celebrities’ fashion choice, saying:  “the world's biggest stars shirked trends in favour of individual statements …”
Hmm…not sure if they were making individual statements, or they were wearing dresses that their designers thought would make individual statements.

Sounds terrible, I know. But the general aversion to difference is not such a bad thing in itself. It’s a messy, convoluted world out there and in order to construct meaning, it’s necessary for us to build stereotypes for easy navigation and categorization.
These stereotypes produce norms, values and preferences, which dictate many of our actions.
It’s little wonder that Hitler was scrupulous about camera positioning during his speeches and in ensuring members of his entourage did not tower over him. He was vertically challenged, and he knew that in general there was, and still is, a preference for taller leaders.  So he tried to disguise his ‘deficiency’. 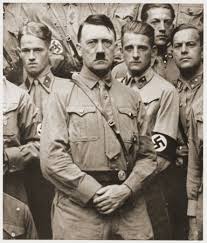 The status quo dictates that to fit into society, you need to
Dress a certain way to gain respect and validity
Talk a certain way
Think a certain way
Act a certain way
Wear your hair a certain way (e.g. tales of African American kids being sent home from school for wearing ‘unruly’ hair that the school authorities deem distracting never go away)
Write a certain way (for aspiring authors,  you’ll literally remain a ‘household name’ (known only by your household) if your writing doesn’t tick the right boxes)
So, if you still have fancy ideas about trailblazing your way into history with some marks of originality, the world has moved beyond that.
Mass production for mass consumption is the order of the day.